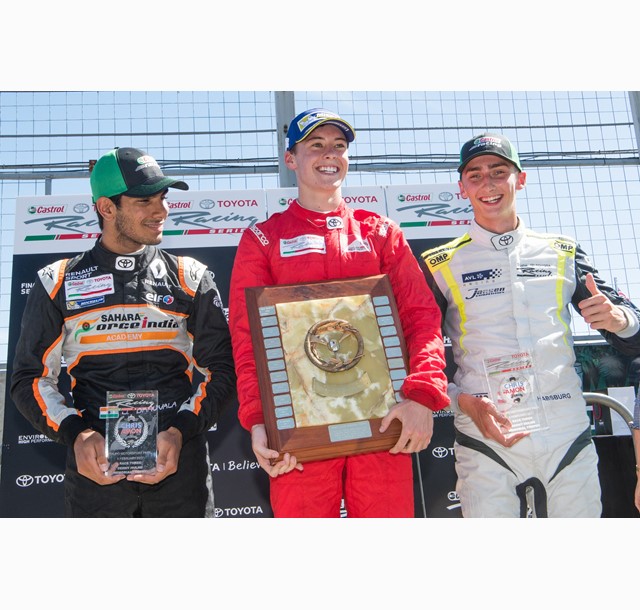 Getting the best start from the outside of the front row of the grid, the Christchurch teenager got to the first corner ahead of pole sitter Jehan Daruvala (India) and was never headed.

"I led yesterday (Saturday afternoon) and then made a mistake," said Armstrong. "At least I learned from that and proved I could win from the front."

Daruvala initially let Armstrong establish a two second lead, but then fought back and was narrowing the advantage. "I was taking a lot of risks hunting him down," said Daruvala. But then he had one "moment" too many and ended up off the track.

"I was lucky not to get beached on the scoria," said Daruvala. "After that the fight was over."

Armstrong is now fourth in the championship, one point ahead of Daruvala and having gained more points than anybody else over the three races at Taupo is still just focused on winning races.

Daruvala was able to hold onto second as third placed Ferdinand Habsburg had drifted back, holding up a train of six cars. The Austrian drove a great defensive race to hold the position from championship leader Thomas Randle.

Habsburg wasn't as fast and had the Australian alongside him on numerous occasions, but he held his nerve and the inside line into the corners to stay in front.

"When I saw him right in my mirrors I realized it was going to be a long race," said Habsburg. "I just focused on my exit speed from the corners to try and hold him off. He gave me a really hard time."

Randle now has a 27 points lead over Verschoor who was fighting a similar rear guard action against yesterday's winner Brendon Leitch, who also had the obviously faster car.

The Invercargill driver was alongside and even in the dirt in the infield "S" corners, but could not press home his advantage. They finished seventh and eighth.

Leitch has moved up to seventh in the series, with Taylor Cockerton (Pukekohe) who had to replace a front wing in the morning's preliminary race having his best race of the weekend after starting ninth and finishing sixth.

Almost going under the radar in the championship battle has been Pedro Piquet. The Brazilian won the morning's 15 lap event from Randle and Daruvala and is now only four points behind Verschoor.

The final three races will be held next weekend at the Chris Amon circuit, Manfeild, culminating in the New Zealand Grand Prix.