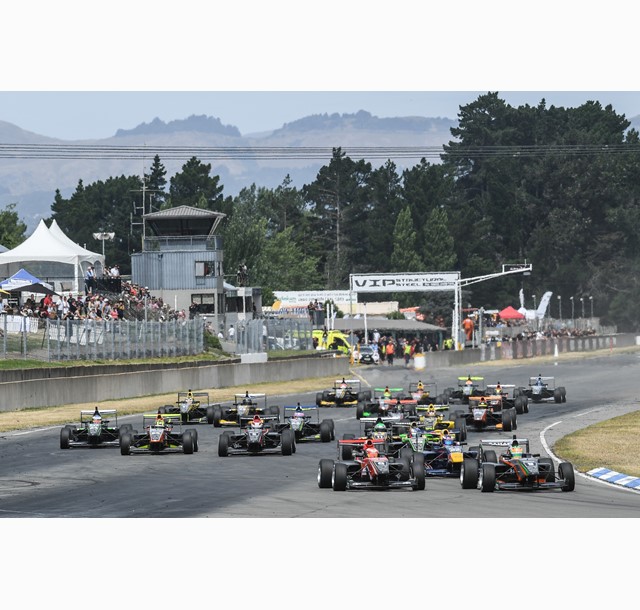 The performance has shown the 16 year old teenager will be one of the main contenders for the series title over the next five weekends and longer term has a promising future in the sport internationally.

Fresh out of a successful Karting career Armstrong needed a brave overtaking manoeuvre around the outside of Jehan Daruvala in the first corner to claim the lead halfway through the 15 laps race.

"It's a fairytale," said Armstrong, who emerged from his car with a grin from ear to ear. "Winning my first race in my home town."

He had qualified second fastest behind Daruvala and that has how they had run during the opening laps, followed by Dutch youngster Richard Verschoor, who completed the podium. All three drivers are signed to Formula One development squads, with Armstrong just being picked up by Ferrari, while Daruvala and Verschoor are with Force India and Red Bull respectively.

But when American Kory Enders spun and stalled in a dangerous place, the safety car took to the track with the field bunched up behind.

Armstrong made the most of his chance on the rolling restart. "I anticipated what Jehan was going to do and got a good slipstream down the front straight," said Armstrong.

As they went into the first corner he went around the outside of the Europe based Indian and denied him the racing line as they exited the corner.

"The car was amazing, my team has done a great job," said Armstrong "I'm stoked."

Armstrong is now looking towards Sunday afternoon's Lady Wigram trophy race, when again he will line up on the grid second beside Daruvala. "It'd be great to win that," he said. "But the championship is about getting more points in every race."

Armstrong's win came over an evenly matched field which included Pedro Piquet (Brazil) and Ferdinand Habsburg (Austria), who both won races last year, but had to be content with coming home sixth and seventh today.

The other kiwis in the field, Taylor Cockerton (Pukekohe) and Brendon Leitch (Cromwell) finished fifth and ninth after starting sixth and thirteenth.