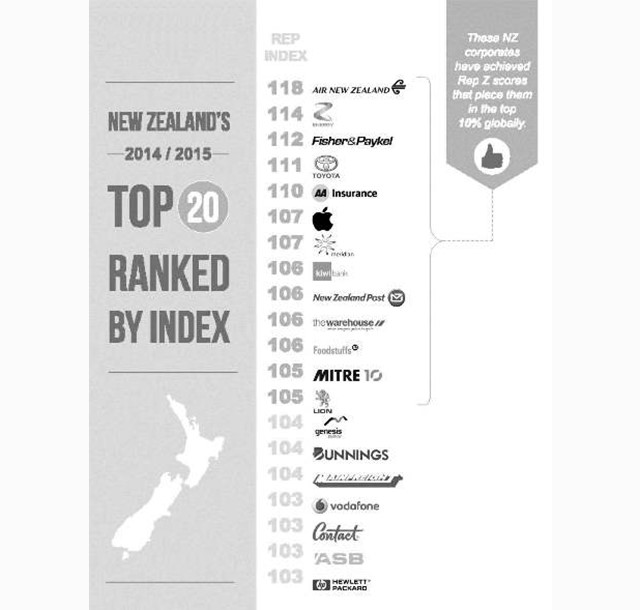 The airline beat fuel retailer Z Energy for the honour, while Fisher & Paykel Appliances, Toyota and AA Insurance rounded out the top five.

Other companies in the top 20 included Kiwibank, Meridian, The Warehouse and Foodstuffs, which operates the Pak'nSave and New World supermarkets.

The Colmar Brunton Reputation Index, developed in partnership with Wright Communications, is the only one of its kind in New Zealand and features the top corporates in this country by revenue.

"This research is the most robust survey on corporate reputation in New Zealand to date," Colmar Brunton Chief Executive Jacqueline Farman says.

"The Colmar Brunton Corporate Reputation Index gives New Zealand companies a unique insight into their reputation, which is crucial to their overall business."

Air New Zealand scored 118 points overall and was the top-ranked corporate in terms of trust (125 points) and social responsibility (117).  Z Energy was second in both categories.

The airline also rated second in success behind global technology giant Apple, while Toyota edged The Warehouse to lead the fairness category.

"Communication programmes are valuable for creating awareness of good operational practices and in enhancing the organisation's relationships with stakeholders."

Wright says effective communication is more important than ever, with the rise of social media increasing reputational risks for corporates.

"A good reputation takes years to build but it can be destroyed in a day.  Many CEOs will tell you that their reputation is hands-down their most important asset and protecting it should be a priority."

Three out of four consumers (74 per cent) would buy from companies with a RepZ score of 105 or more, but fewer than half (46 per cent) would consider buying from a company with a weak reputation of 95 and below.

"The top 13 companies on the Colmar Brunton Corporate Reputation Index all achieved 'strong' RepZ scores of 105 or more, which would place them in the top 10 per cent of businesses globally," Farman says.

"Corporate reputation is important no matter what industry you operate in, and it has a material effect on your sales."

A feature of the Colmar Brunton Corporate Reputation Index is the particular importance Kiwis place on trust.

The four categories are weighted and trust makes up more than a third (37 per cent) of the overall RepZ score in New Zealand, compared to 16 per cent globally.

This benefited Air New Zealand, which had a "top box" advocacy score (meaning people would speak highly of it without being asked) six times the average across the 50 companies in the index.

"Air New Zealand's strong performance in this category is a significant factor in its strong overall reputation."

"This recognition is testament to the hard work of 11,000 Air New Zealanders who come together to deliver innovative products and the great Kiwi service which our airline is renowned for to millions of customers at home and around the world each year," says Luxon.

The survey, conducted from late 2014 to early 2015, featured a nationally representative sample with an average sample size of 500 respondents per industry category.

The results are being revealed at an event for CEOs on 1 May 2015.