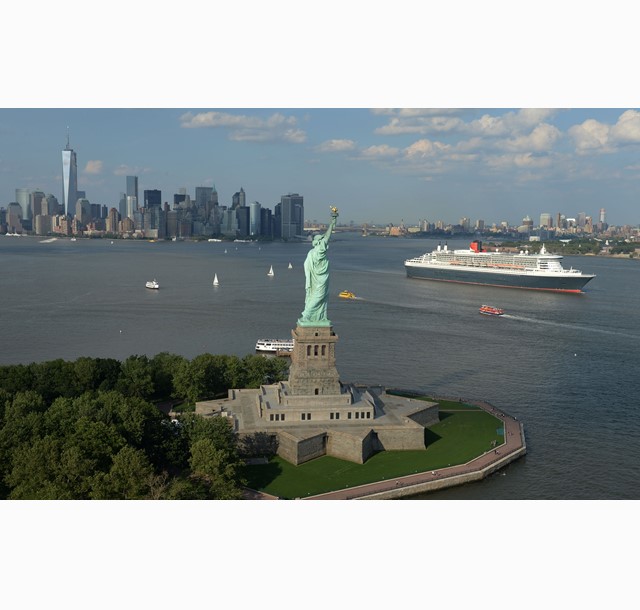 On board, keynote speakers will be presenting talks about the design of ship, there will be special Big Band performances, and a celebratory Gala Dinner will be held on July 11.

Queen Mary 2 is the largest, longest, tallest, widest and most expensive liner ever built. Today, she is the only ocean liner in service and is the fastest passenger ship in the world. Since entering service in 2004, she has cemented her place in maritime history as the most famous passenger ship afloat today.

In the course of Queen Mary 2's 200 Atlantic crossings, Cunard estimates that half a million passengers have consumed 8.4 million cups of tea, 980,000 scones, 481,000 bottles of champagne, 644,000 eggs and 960,000 litres of milk. In total, 22.4 million meals have been served, over 600,000 nautical miles.  And these figures do not take into account consumption on her annual World Cruise or sailings to the Canaries, Fjords, Iceland, the Low Countries, around Britain, up to Montreal and Quebec in Canada, and among the islands of the Caribbean.

In addition, over the 200 transatlantic crossings more than 1000 dogs have been pampered in the only kennel facilities aboard a passenger ship.

"As each year in service passes Queen Mary 2 becomes even more special and we will continue to celebrate and cherish her milestones and history," Cunard President and Managing Director Peter Shanks said.

"Looking at Cunard's earlier Queens, Queen Mary crossed the Atlantic 1001 times, Queen Elizabeth crossed 896 times and QE2 crossed 812 times. Queen Mary 2 will achieve the milestone of 200 in this, her ninth season since entering service in 2004. And she has many seasons and crossings still ahead," Mr Shanks said.

Queen Mary 2 Hotel Manager Robert Howie said every crossing had its moments, with no two ever the same.

"The beauty of transatlantic crossings is the elegance of our guests, the fact that you seem transported back in time, and even the unpredictability of the weather," Mr Howie said.

"Having sailed with many guests across the Atlantic, they all marvel at how the ship handles the varying weather and this is when Queen Mary 2 comes into her own, performing at her best - it's what she was designed for."