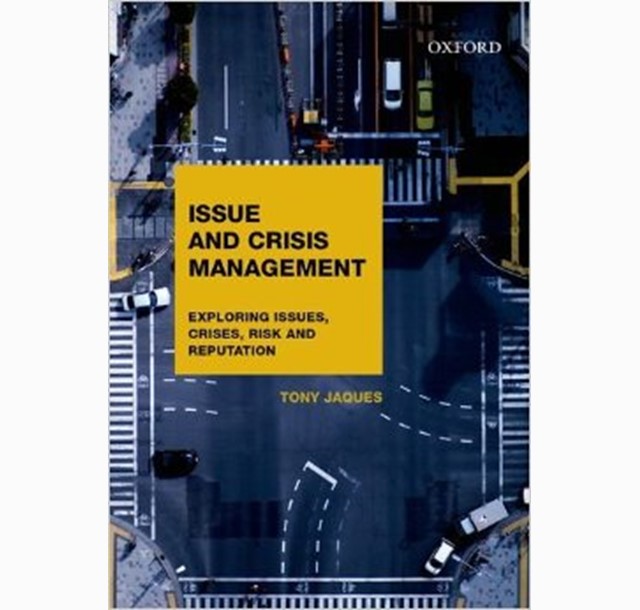 With social media capable of turning a seemingly minor local issue into worldwide news, executives and public relations practitioners could be forgiven for lying awake at night praying their companies will be spared the wrath of the Twitterverse.

The need for companies to have coherent plans to deal with issues is more important than ever in the online age, according to crisis management specialist Tony Jaques.

In one example, an Australian anti-coal mining activist triggered a $300 million crash in the share value of mining firm Whitehaven by sending out a hoax news release with false bad information about the company.

Rather than dedicating a specific chapter to the risks (and opportunities) of the online world, Jaques weaves these elements into each of the 12 chapters, which progress from issue management through to crisis management and risk management.

One of the areas he explores is agenda setting, which has traditionally been dominated by mainstream media playing what he describes as a 'gatekeeper' role.

Jaques says the growing use of social media now allows individuals and organisations outside of the traditional forms of media to set the agenda, meaning organisations need to do more than just read the newspaper each morning to keep across potential risks.

"Internet-mediated agenda-setting has dramatically increased the number of 'gatekeepers', so that bloggers and other online activists now have powerful new tools to push their own priorities onto the public agenda."

He expands on the role of the internet in a chapter looking at activism and the tactics used by activists to promote their views and attack their opponents.

"Without doubt the greatest advance in issue management in the last 20 year has been the rise of the internet and social media," Jaques writes.

"For activists, the digital revolution has brought particularly profound change, giving them a new weapon that can alter the organisation-stakeholder dynamic, potentially increase the power of activist groups, and make their concerns more salient to organisations and society."

Another key message of the book is that companies can tick all the legal and technical boxes but still be found guilty in the court of public opinion.

Importantly, Jaques warns that being factually correct is not enough: if something is seen by stakeholders and/or the public to be a problem then it is a problem.

Because of this, clear communication is crucial and public relations practitioners have an important role to play in making sure the message is easily understood.

"Engineers and other executives in technical fields are prone to using complex language and jargon, which might be accurate and legally approved, but comes across to the stakeholder as arrogant and insensitive," he writes.

"As the organisation's language expert, the public relations person needs to produce communication that is technically correct, but that ensures all stakeholders understand its intended meaning."

The book draws lessons from a mix of prominent international case studies and ones closer to home, including the infamous "Where the bloody hell are you?" advertising campaign in Australia and the Pike River disaster in New Zealand.

It also draws a clear distinction between issues, crises, emergencies and disasters, offering easily understandable definitions for each.

As he explains, an 'issue' can do much more damage to a company than a 'disaster'.

For new entrants into the public relations industry, "Issue and Crisis Management: Exploring Issues, Crises, Risk and Reputation" provides a clear and comprehensive introduction to these crucial concepts.

For more experienced practitioners it offers a useful refresher to keep them up to speed with developments in the sector, especially in the rapidly evolving online landscape.

Ten years ago Facebook was in its infancy and Twitter had not been invented yet.  One can only wonder what new technologies public relations practitioners will have to deal with in a decade's time if Jaques writes a new version of his book.